True foodies will say that sometimes the destination is not what matters when planning a trip. In other words, bucket lists can be made by letting your tastebuds lead the way! There are dishes that are the stuff of such legend and high regard, you just need to experience them for yourself. We’ve made list of 16 iconic U.S. dishes worth the cost of a plane ticket, tank of gas or hotel stay. Disagree? Let us know in the comments below!

RELATED: 11 essential Chicago restaurants everyone must try at least once

Maine is known for its seafood, lobster in particular. There’s nothing better than enjoying the sweet meat on a gorgeous sunny, summer New England day. The charming town of Kennebunkport is home to one of the best lobster rolls you’ll ever taste. Grab a seat at Mabel’s Lobster Claw, a Kennebunkport staple since 1953, and order this glorious roll. It’s served simply, you can choose to have the lobster tossed in hot butter or mayo (ask for both!) and the meat is stuffed into the roll in big chunks. Served with fries and coleslaw, it’s the perfect summer meal in the perfect seaside town. Note: Mabel’s is only open seasonally. 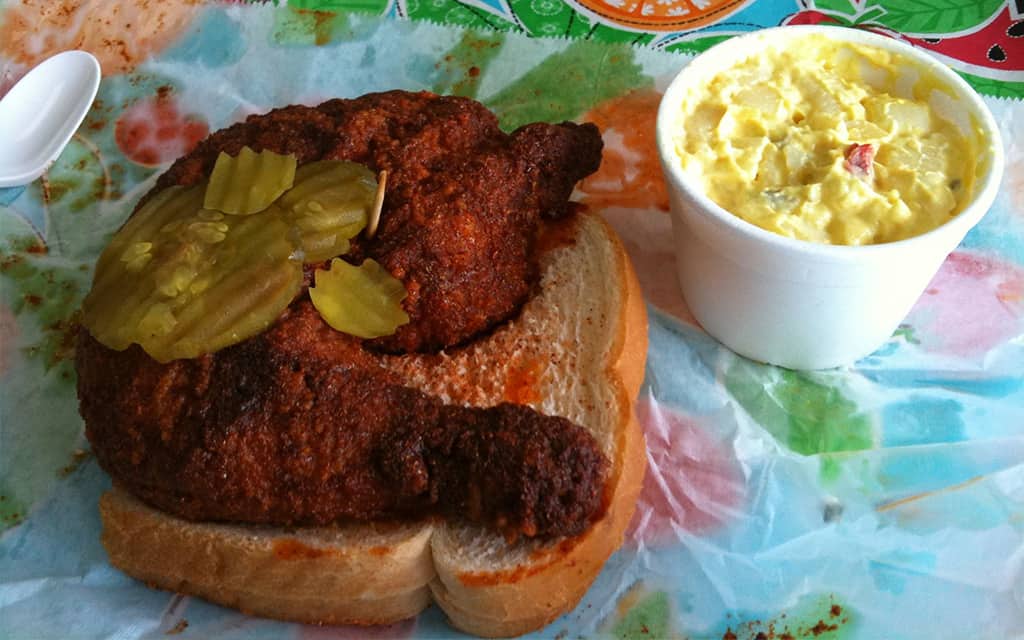 This dish was invented in SF in the 1800s, as a type of poor man’s stew. Fisherman would toss whatever was left over from the day’s catch into a tomato-based broth and voila! Tadich Grill (the oldest restaurant in the city) is rumored to have been the first restaurant to serve it and while it’s still a seafood stew, they’ve classed it up a bit. The tomato base boasts fennel, onions and herbs, plush shrimp, fish, clams and mussels cooked to perfection. Sop up the soupy remnants with some crusty garlic bread and you’ll be warmed to the bone.

House-roasted pimento peppers is what makes this cheese spread better than all the rest, and boy oh boy do Southerners have opinions about good pimento cheese. Chef Sean Brock has been a leading force in the revival of Southern cuisine and this starter dish at Husk in Charleston is reason enough to visit the charming waterfront city. Whipped to fluffy perfection and topped with country ham cracklins, you’ll be tempted to order it again for your entree.

The Tasting Menu with wine pairing at Per Se: NYC 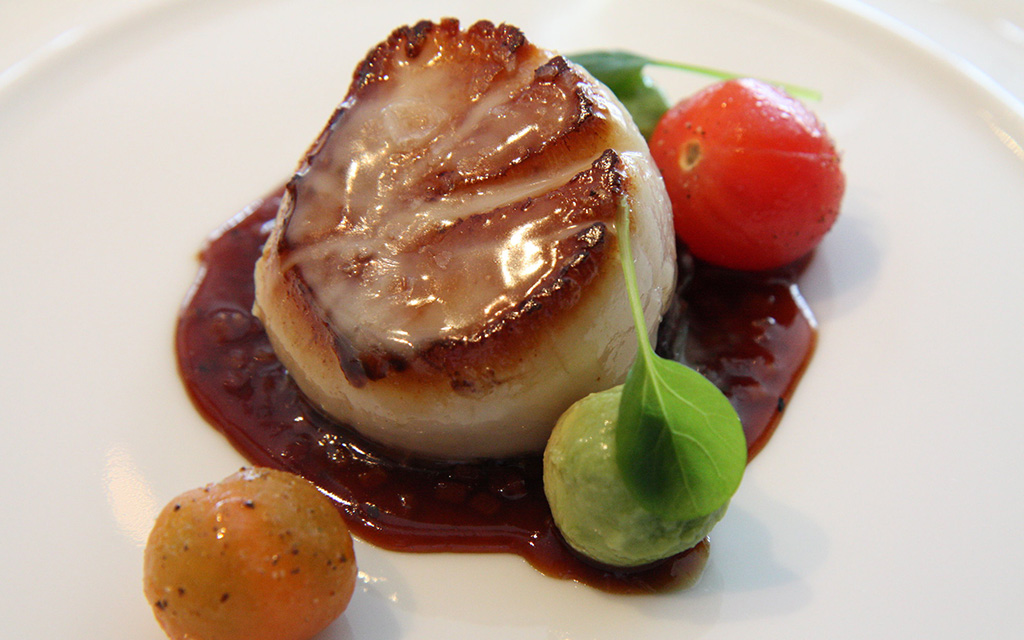 So this one isn’t exactly a dish, but rather 13 of them. And while some say a tasting menu should be saved for special occasions; we say the tasting menu is the special occasion so treat yourself! The Tasting Menu at Per Se, by Chef Thomas Keller, is a thing of beauty. The 13-course sampler changes daily and usually starts light with seafood, gradually getting richer (think foie gras, tagliatelle, lamb) and of course ending with dessert. The variety and attention to detail is astounding and the flavors are mind boggling. Yes, it’s pricey but it’s an experience you’ll remember for a lifetime!

Hawaii is a long way to go to get breakfast, but one bite of the pitaya bowl at Cane & Canoe at Montage Kapalua Bay will have you booking a return flight to Maui ASAP. The stunning bright fuchsia fruit is pureed and topped with a variety of tropical fruit, a healthy drizzle of local honey, and some granola for crunch. Each bite lights up your tastebuds and feels so decadent, you’ll hardly believe how healthy this breakfast bowl really is! 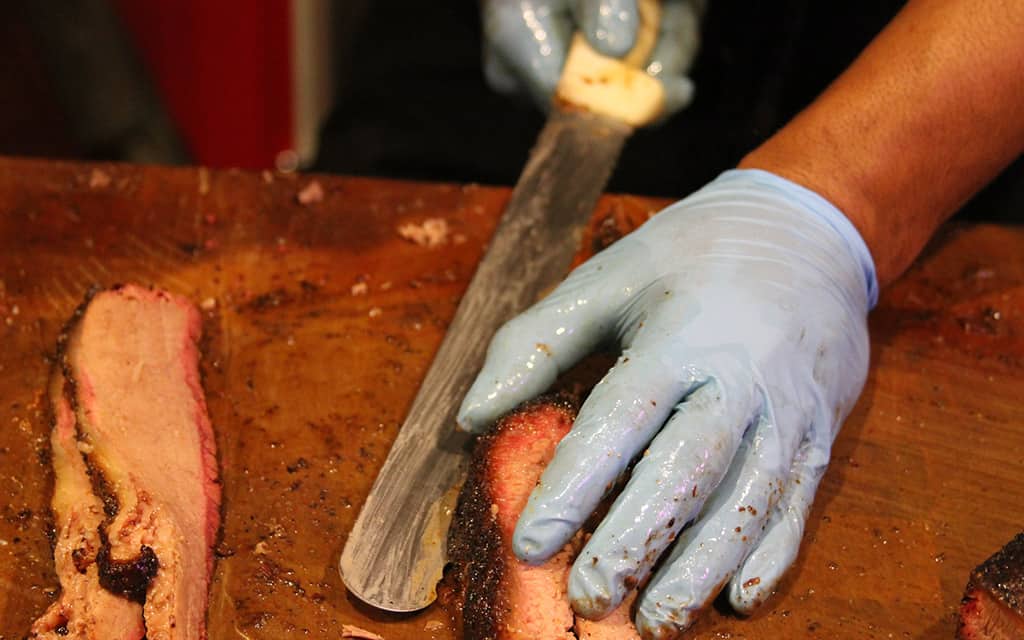 Texas is known for its barbecue and Franklin BBQ in Austin is the best of the best at smoking meat. The brisket is smoked slowly for hours on end to juicy perfection and sold by the pound or stacked onto a sandwich. You truly can’t go wrong however you order it and one bite will give you a whole new appreciation for the time it takes to get it smoked just right. Of course, such pleasure doesn’t come easy. Prepare to arrive early and wait in line a few hours. 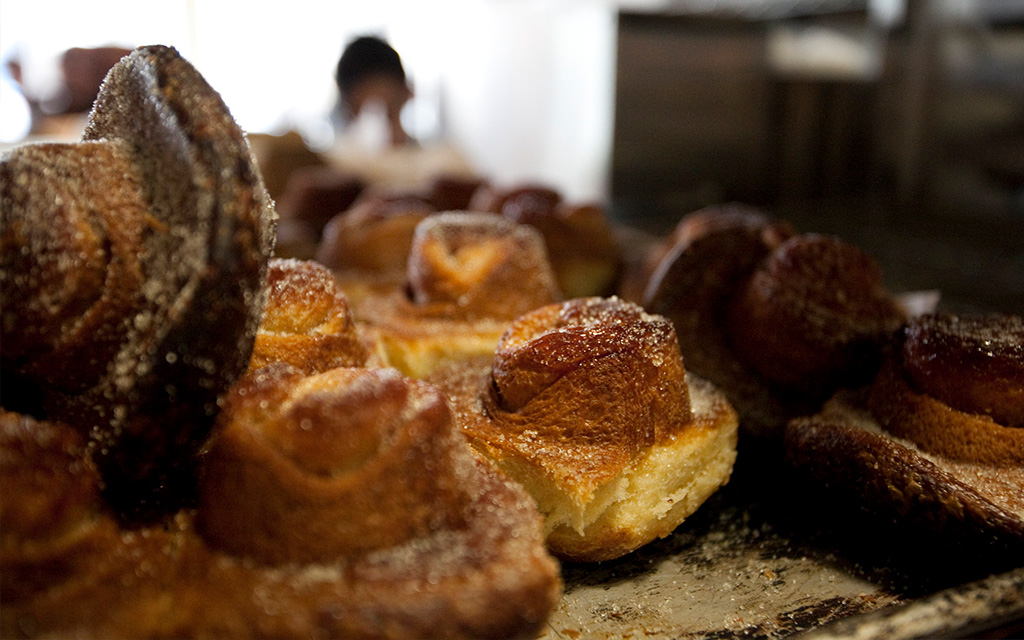 These beauties are more than just cinnamon rolls. Yes, the buttery, gooey buns are coated in a beautiful dusting of cinnamon sugar, but the flavors seem other worldly. You’ll notice the sweetness from the sugar and richness of a healthy heap of butter, but orange zest brightens up each bite and melds the flavors beautifully. So much so, these buns have drawn long lines at Tartine for years, so get there early! 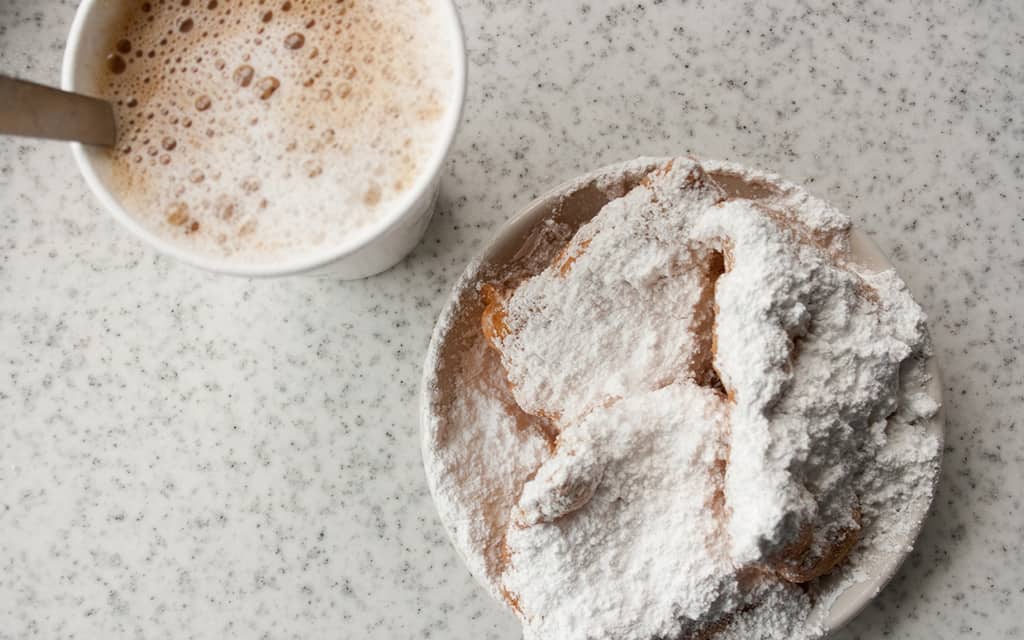 You’ve seen the photos on instagram: little fried dough balls covered in a snow storm of powdered sugar, long lines of people waiting to get their hands on a heaping trio, and tables dusted in powdery remnants of the delicious treat. You’ve wondered if they’re worth it or just tourist hype. The answer is yes, they’re worth it… Yes, a million times yes! Café du Monde, in operation since 1862, serves the sugar-dusted confections in orders of three, so place your order appropriately. Be sure to wash it down with chicory coffee, a traditional New Orleans blend of coffee that includes chicory, of a plant similar to a dandelion that the French used to boost the flavor of coffee during their Civil War when coffee became scarce. The tradition was brought to the states by the Acadians who settled in New Orleans—and we’re so glad they did! 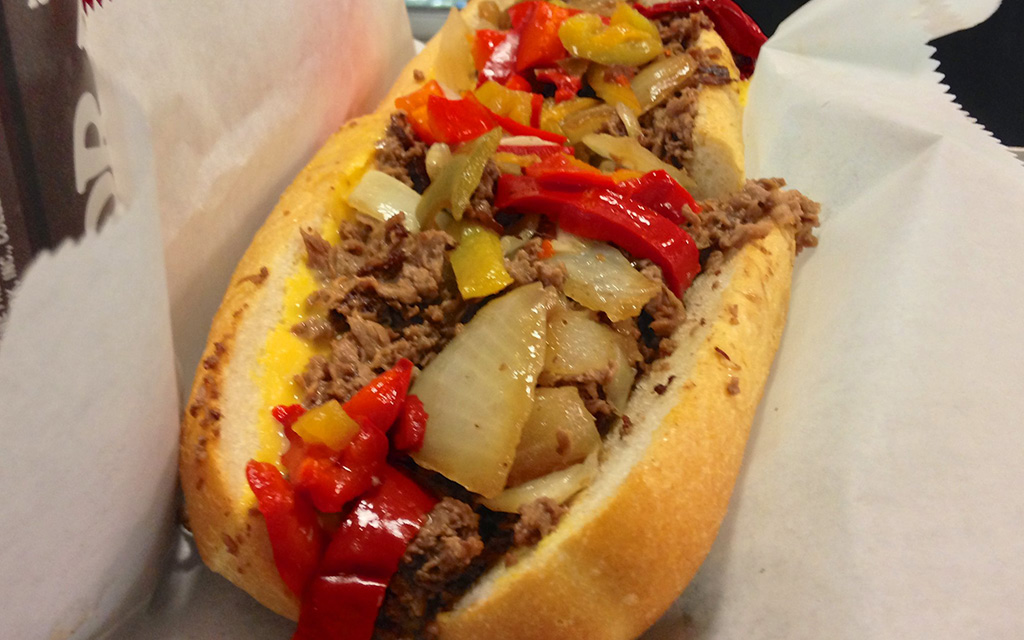 There is a lot of debate over who has the best Philly cheese steak in Philly. Families have been split over it and tourists come to try them all. We’re taking a side and it’s with Jim’s Steaks. Open since 1939, they offer the meaty sandwich topped with American cheese or Cheez Whiz (we vote Whiz), and grilled peppers and onions. Each bite is juicy and heavenly and we don’t care who challenges that! 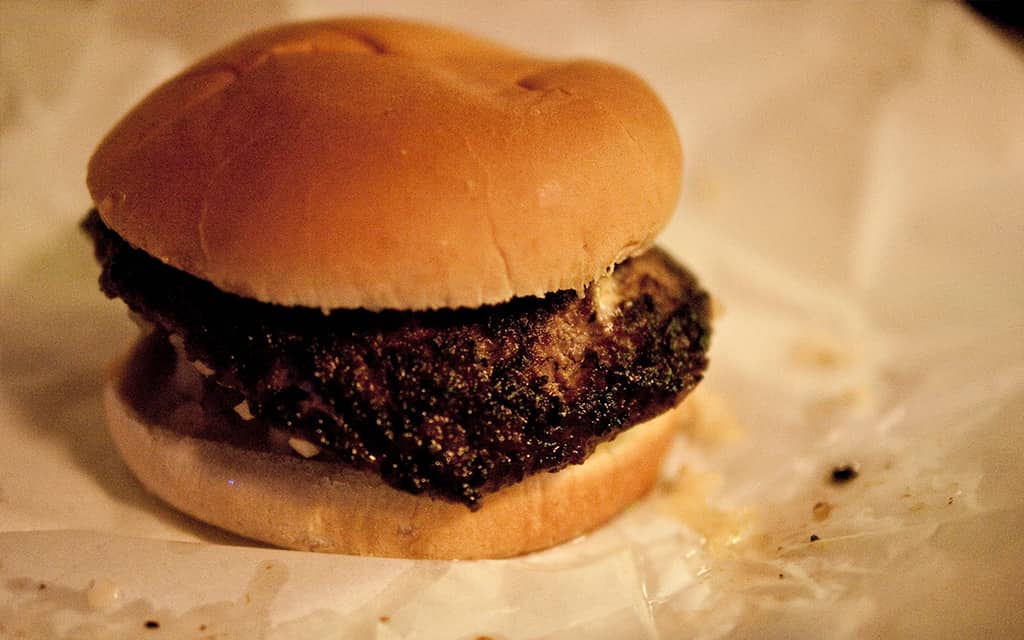 For those who don’t know, a Juicy Lucy is a burger stuffed with cheese, rather than topped with it. The result is a pocket of ooey-gooey goodness that drizzles out into each burger bite. Matt’s Bar in Minneapolis claims to have invented this glorious sandwich (though another local spot does as well) and for $7.75, you can see what all the fuss is about. Hit the ATM before you arrive though. Matt’s is cash only!

Seemingly 100 layers of the thinnest pasta on planet Earth, the lasagne at I Sodi in the West Village will transport you to Italy, even if you’ve never been. Towereing several inches off the plate, it’s meaty and rich while still miraculously feeling light. Begin with their cheese and charcuterie plate and end with a seasonal dessert and you’ll have had yourself one of the loveliest meals of your lifetime.

Any doughnut at Voodoo Doughnut: Portland, OR 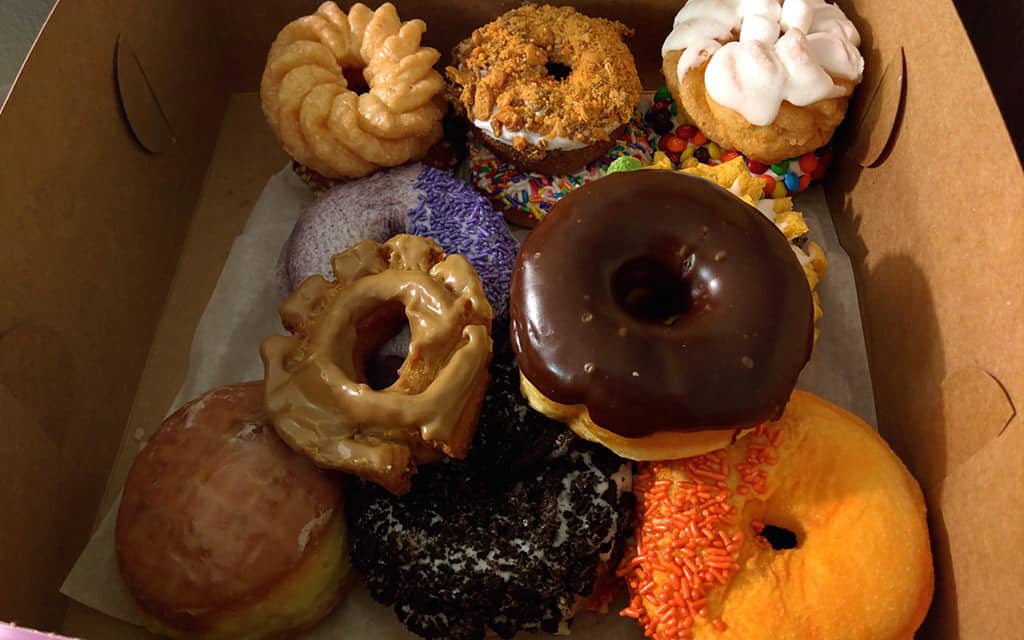 Follow your sweet tooth to the Pacific Northwest and let Voodoo Doughnuts put a spell on you. From simple glazed and chocolate frosted doughnuts to cereal topped creations and old fashioned cake doughnuts, they’ve got over 50 different flavors to choose from and have been serving them since 2003, long before small-batch doughnuts became trendy. For a true experience join the queue at the original Chinatown location, and prepare to wait! 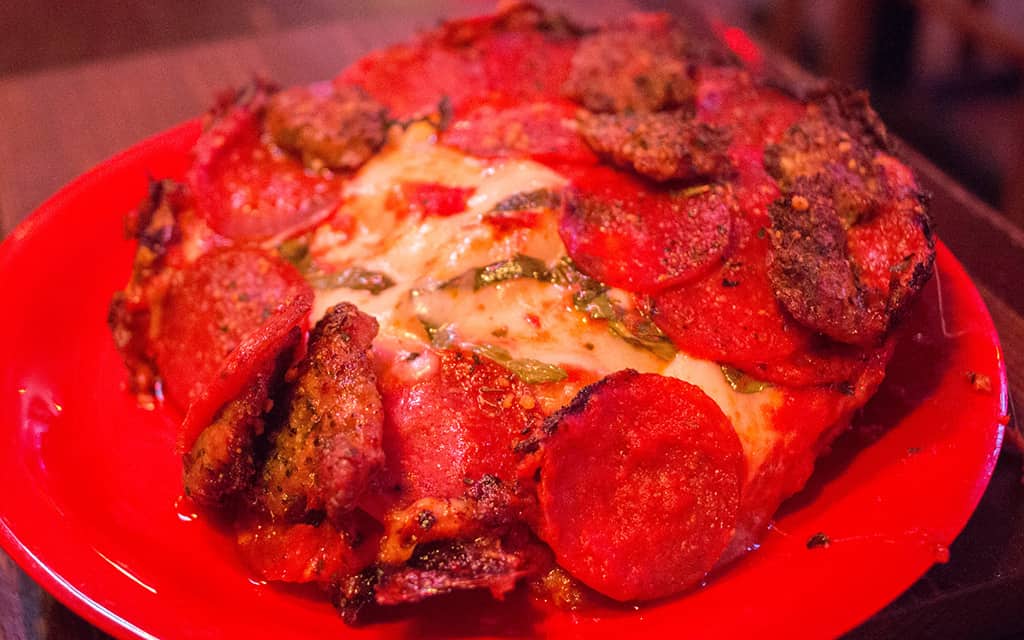 Deep dish fanatics have likely visited the Windy City in search of the perfect decadent pie. It can be found at no-frills Pequod’s Pizza, where they pride themselves on their caramelized crust. Locals will tell you this is best deep dish pie in town and we agree. The inch or two of gooey, cheese, pizza-y goodness keeps us coming back and luckily Chicago is a walking city so there’s ample opportunity to keep that post-pizza waistline trim.

This tiny roadside taqueria has been a Santa Barbara staple for years. When Julia Child went and declared it her favorite place for tacos, suddenly the secret was out. Today, the lunch lines often wrap around the block. While you wait to order, you’ll get to watch the homemade tortillas being pressed and grilled while the kitchen smells start your tummy rumbling. Among other delicateble items (we’ve never eaten a bad item here), be sure to order the lomito suiza taco featuring grilled marinated pork with melted cheese between two corn tortillas. It’s the stuff foodie dreams are made of.

If we ever get the chance to meet chef David Chang, we’re giving him a bear hug and a kiss. Ever since the first slurp we took of the Momofuku Ramen at his tiny East Village eatery (many years, and many bowls ago), we have dreamt of it time and time again. The pork broth is salty and richly flavored, and each spoonful is filled with pork belly, bits of soft boiled egg, and perfectly cooked ramen noodles. It is truly a bowl of perfection.