11 things you can only do in Guadalajara, Mexico

Considering Guadalajara is Mexico’s second largest city, as well as the birthplace of mariachi music, wide-brimmed sombreros, rodeo-like charros and a tasty dessert known as jericalla, it’s no surprise that this sophisticated and historic metropolis offers plenty of unique experiences. Here are 10 of the most exciting things to do in the Jalisco state capital that are quintessentially tapatío (meaning related to Guadalajara or someone from Guadalajara).

RELATED: 5 unforgettable Mexico city experiences no one should miss

Charreria—a sporting event similar in concept to a rodeo—is an important tradition in the state of Jalisco, with multiple generations of families often involved. The best way to witness the talents of the charros (something like Mexican cowboys) is to attend the competitions, usually held on Sundays at various locations around Guadalajara. The competitive excitement comes to a head every September, when the city hosts the National Charro Championship. You can also test your own equestrian skills by going horseback riding at a 17th-century colonial hacienda just outside the city, as part of a tour offered by Jalisco Trip.

The colorful, extravagantly dressed characters that populate the world of Mexican wrestling are world famous. And the best possible way to appreciate the full excitement of this theatrical sport is live and in person, at Guadalajara’s Arena Coliseo. The flurry of activity outside the ring is part of the fun; arrive early at the downtown venue, so you’ll have time to check out the vibrant masks, capes, T-shirts and other souvenirs on sale—and also to witness the infectious enthusiasm of the audiences, who often dress up as their favorite wrestlers.

Savor a “Drowned Sandwich,” goat stew or a gay taco Every region of Mexico has its own unique culinary traditions, and Guadalajara is no exception. Among the local favorites are the torta ahogada (literally, “drowned sandwich”), a hearty meal that usually consists of thick bread and fried pork, all submerged in a sauce made from dried chili pepper and/or tomatoes. Also popular is birria, a rich stew (often made with goat) that’s a specialty at restaurants in a neighborhood called Nueve Esquinas. For a tasty late-night snack after a night on the town, consider a stop at Tacos Gay, which is perhaps Mexico’s only gay-identified taco stand, appropriately located near most of the city’s LGBTQ nightlife.

Cycle through the streets

Every Sunday, Guadalajara becomes a decidedly cyclist-friendly city, as various major thoroughfares are closed to motorized traffic. It’s part of Via RecreActiva, a government initiative to encourage healthy activities. It’s easy for foreign visitors to rent bicycles for the day using MiBici, a bike sharing service with kiosks throughout the city; this service can provide an interesting alternative for self-guided sightseeing throughout the week, too.

Ride the rails to a tequila tasting

Sure, you can sip tequila just about anywhere nowadays. But why settle for the usual, when you can go all out and savor the spirit in its birthplace? The charming town of Tequila is only about 40 miles from Guadalajara, making it an easy day trip (which you can book in advance here) or stay overnight at a local accommodation such as the barrel-inspired Matices Hotel. And the journey can be just as interesting as the tasting when you take the Jose Cuervo Express, an upscale train with three different categories of service; all excursions include a tour and tasting at the Jose Cuervo distillery. For a faster-paced visit, the Casa Sauza distillery offers a VIP helicopter transfer that whisks travelers from Guadalajara to Tequila in minutes.

Downtown Guadalajara is home to countless historic sites and attractions, but only one is a UNESCO World Heritage Site: Hospicio Cabañas, a grandly designed 19th-century structure that once housed orphans, senior citizens and other disadvantaged citizens. Today, it hosts rotating art exhibits and also a magnificent permanent exhibition of work by Jose Clemente Orozco, one of Mexico’s greatest muralists.

About an hour from Guadalajara lies Chapala, Mexico’s largest freshwater lake. It’s a picturesque and easy day trip from the hustle and bustle of the city, and visitors enjoy cruises to one of the lake’s tiny islands for lunch, as well as strolls through the quaint lakefront town of Ajijic, which is home to cute shops, restaurants and a large expat community. Book your day trip with pick up in Guadalajara here.

Stare at a mummy 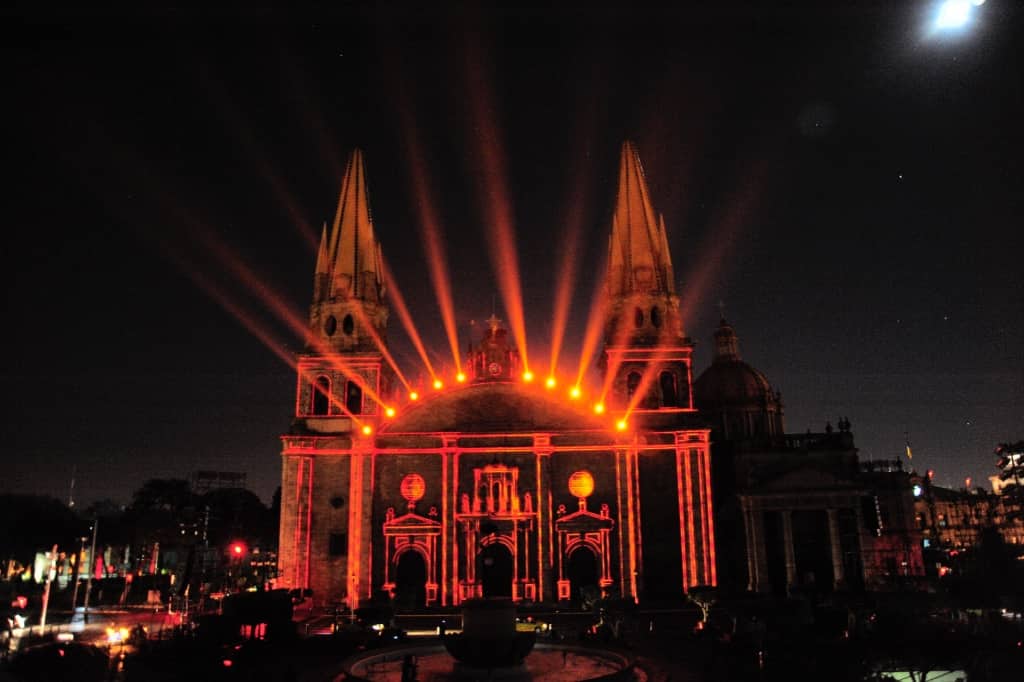 The Catedral de la Asunción de María Santísima—the Guadalajara Cathedral—is likely the city’s best-known landmark, thanks to its beautiful design featuring a 17th-century Spanish Renaissance main building topped with a pair of neo-Gothic towers dating back to 1854. But the diminutive, beautifully dressed mummy that rests inside is what catches the eye of some visitors. Santa Inocencia (Saint Innocence) lies in a glass case at the front of the sanctuary, attracting curious tourists as well as praying churchgoers. The official story says that the mummified remains are of an Italian girl and were shipped from Rome in 1786. Some say that the girl had been tortured and killed by Roman Legionnaires, or that her non-Christian father had murdered her in a rage after she attended a church service. A video from a few years ago purportedly showed her opening her eyes. Whatever the true explanation, it’s a bizarre and fascinating piece of history.

Dine in a bone-filled restaurant

At first mention, the idea of dining in a room filled with bones may sound unappetizing. But not when the venue is Hueso, a decidedly stylish gourmet restaurant that’s one of the hottest places in town for contemporary cuisine. Decorated with more than 10,000 bones, Hueso’s clean, white décor sets the stage for dining—and it’s just one example of Guadalajara’s impressive culinary creativity.

Shop at one of Latin America’s biggest markets 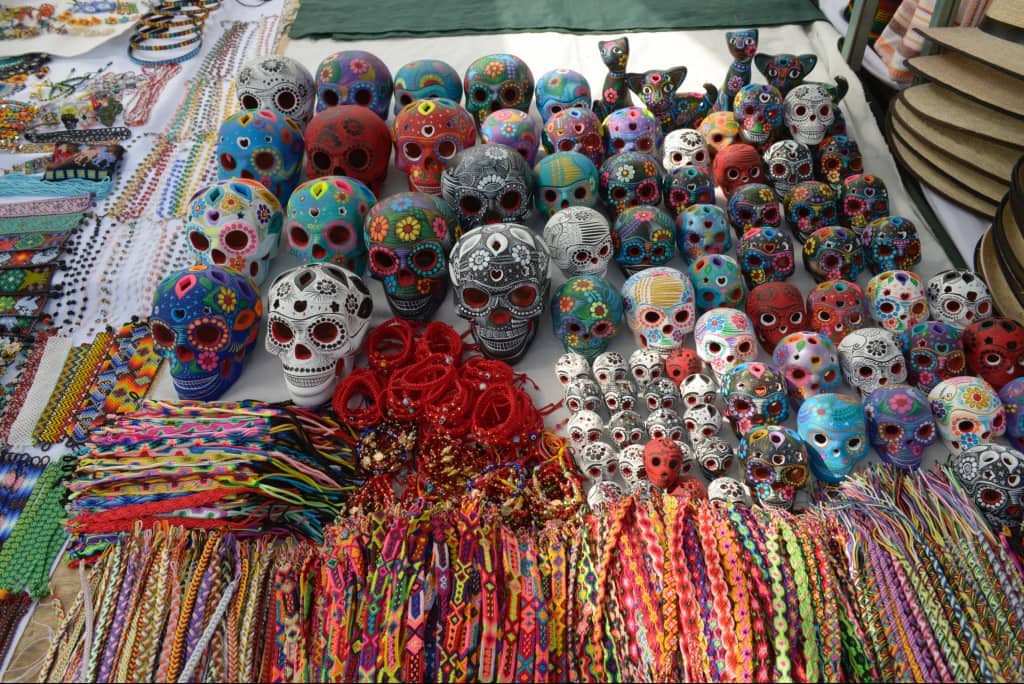 All of Mexico has flan but only Guadalajara specializes in jericallas, a sort of flan-creme brulee hybrid with a crispy top. As the story goes, a nun at a local orphanage wanted to give the kids a protein-packed sweet treat made with eggs and milk. She left it in the oven for too long, the top hardened and—voila!—jericallas were born! You’ll find them at different spots around town but Cenaduría Esther or Kamillos 333 are two especially popular spots for the dessert.