Austin isn’t really a bucket list destination the way New York or San Francisco are. There’s no Empire State Building from which to gaze out over the city nor are there rickety cable cars to tote tourists from one side of town to the other. Instead, the best way to do Austin is to “hang out,” and there’s a certain art to that. If you’re visiting for the first time, these are the X things you should definitely not miss.

RELATED: This is the ultimate Texas road trip 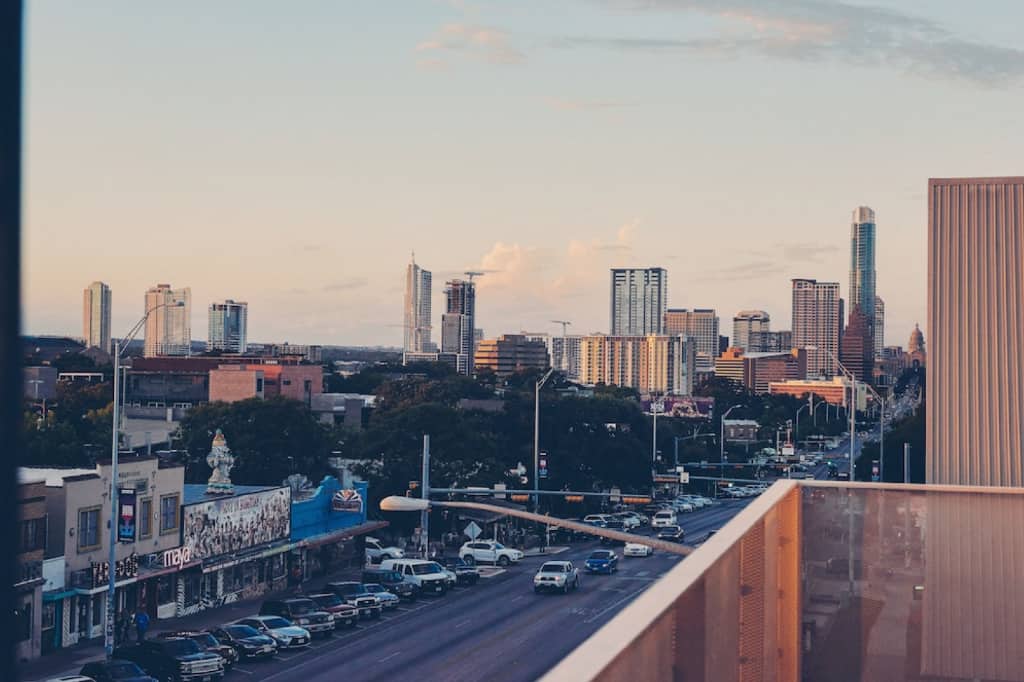 By cruise, we don’t mean in a car. We mean by bike or electric scooter or on foot because you’re gonna want to stop many, many times. Congress Avenue is Austin’s major thoroughfare and also its epicenter of cool. It cuts rights through the heart of the city before crossing over Lady Bird Lake into downtown and dead ending right at the foot of the majestic Texas Capitol. Consider Congress your Austin primer. It’s home to local foodie fixtures like Torchy’s Tacos and Amy’s Ice Creams, legendary honky-tonk the Continental Club, indie and thrift shops galore, and several noteworthy hotels like the revamped Austin Motel and the slick South Congress Hotel. Grab java at Jo’s Coffee and snap a pic in front of its Insta-famous “i love you so much” mural. 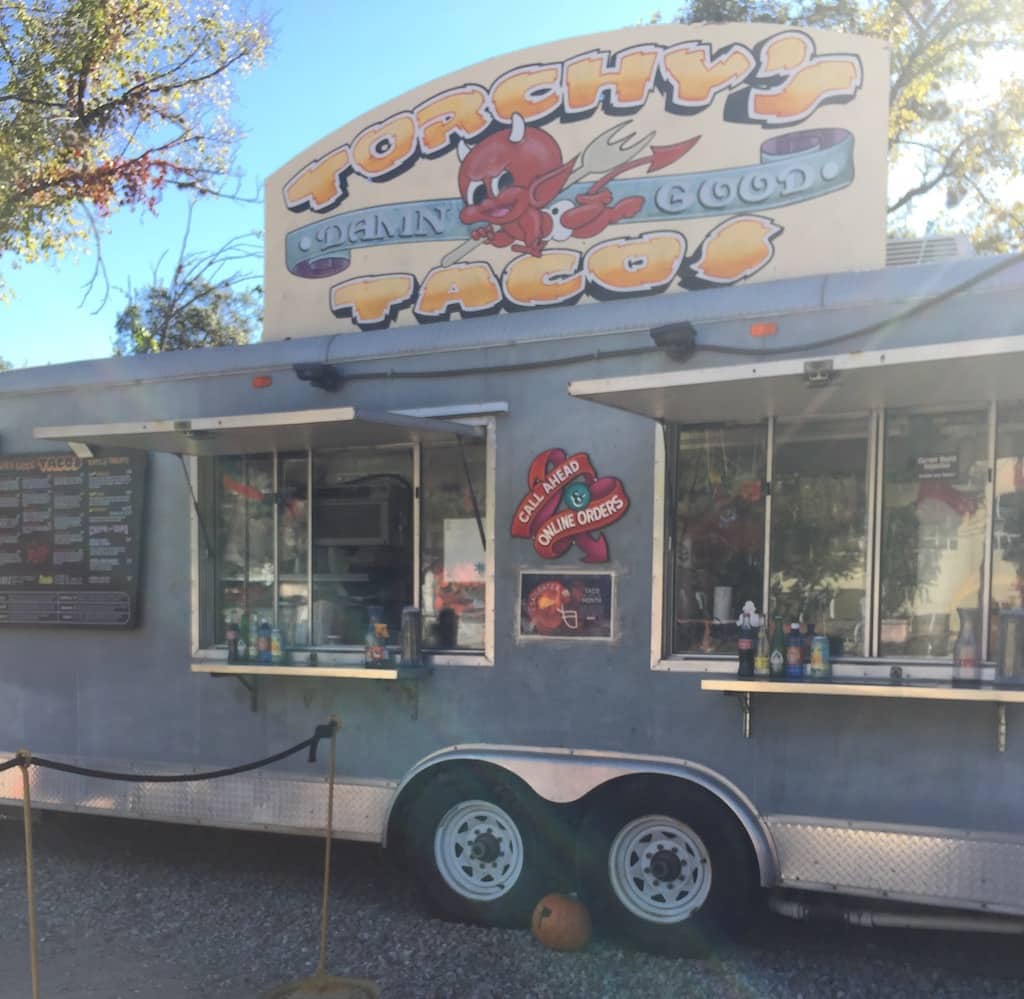 Fun fact: There’s a food truck for about every 95 residents in Austin. That shakes out to about a thousand in this city of tasty eats, and as you might imagine, every ethnic cuisine and foodie trend imaginable is represented. You sort of can’t go wrong just showing up at one of city’s numerous food truck parks like the Picnic, Rainey Street Food Truck Lot, South Congress Food Truck Park and the newish court at St. Elmo Public Market. But if you want to sample some local faves, try hitting up Micklethwait Craft Meats (barbecue), Via 313 (Detroit-style pizza), Churro Co. and Veracruz All Natural (Mexican).

Take a dip in a super cool pool 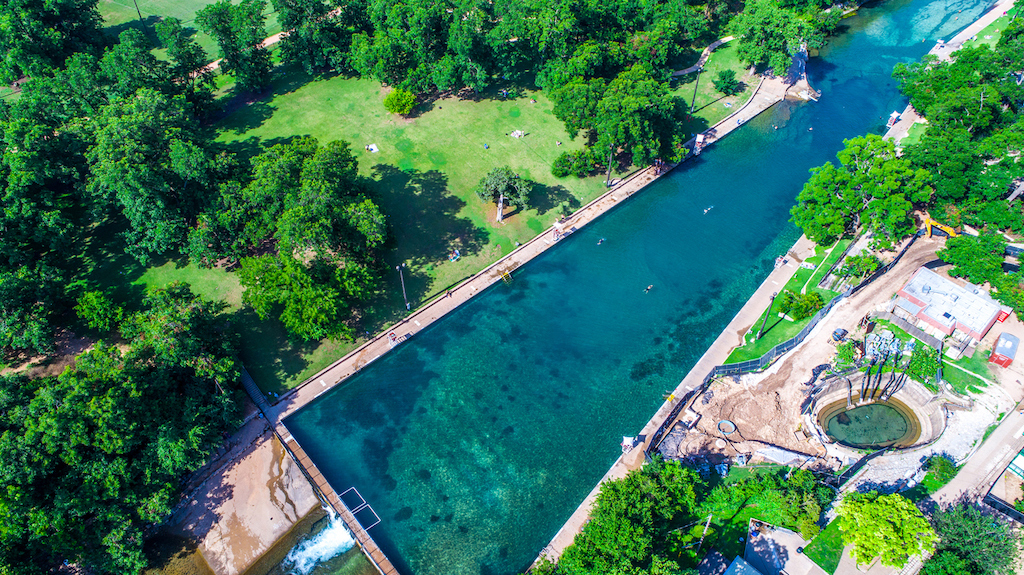 This is no ordinary public pool. Barton Springs, located right in the city, is fed from underground springs so water temperatures average about 68 degrees all year. Carved into a natural rock bed, the pool is great for all ages, with depths that range 0 to 18 feet. Bonus if you’re around for one of the big festivals: The pool’s set in Zilker Park’s 358 acres, so while you swim you can hear bands play during fests that take place there, including Austin City Limits. Fun fact: Robert Redford learned to swim here as a child!

Austin proclaims itself the live music capital of the world and indeed you’ll hear live music everywhere you go. Get the best band bang for your buck by communing with thousands of others at one of the city’s annual festivals. South by Southwest (mid-March) is the city’s most famous and combines music, film, live comedy and conferences, followed by Austin City Limits (early October) which spreads across two weekends. But there’s also the No Idea Festival (February), Honk!TX Festival (early April) and Bat Fest (August) among others. Plus non-music events like Moontower Comedy Festival (April), Texas Trucklandia food truck fest (October), and Austin Food and Wine Festival (April). Seriously, this is just the tip of the iceberg.

Wait, and then wait some more, for barbecue that’s absolutely worth it

How good could Franklin’s BBQ possibly be that it warrants waiting in line for possibly four hours? It is that good—some would argue it’s America’s best—and the line is part of the experience! The brisket is the most sought after dish here; it’s smoked for up to 15 hours and is served moist and packed with flavor. Another favorite is the ribs, seasoned with a secret blend of spices. Tip: If you’ve got kids in tow or just can’t be bothered to spend half a vacation day in line, order ahead—way ahead. Just go on Franklin’s web site one to six weeks before your visit to place your order, and you’ll be able to walk past everyone, straight to the food truck to pick up your grub. And one more caveat: You have to order at least five pounds of meat!

Not actually a lake, but rather a manmade reservoir located on the Colorado River about 30 minutes outside of town, Travis is nevertheless a sprawling outdoor haven for city weary Austinites in need of a sun-drenched day in nature. The short drive reveals why this part of Texas is affectionately referred to as Hill Country, while lakeside pastimes include boating, swimming, kayaking, fishing, waterpark adventures (several beach resorts line the lake) and killer sunsets from one of nine waterfront or water-access bars (water taxi pub crawls are a legit thing). A sliver of lakefront includes Hippie Hollow Park, where nude sunbathing is common (and legal) along the lake’s descending limestone plateaus. 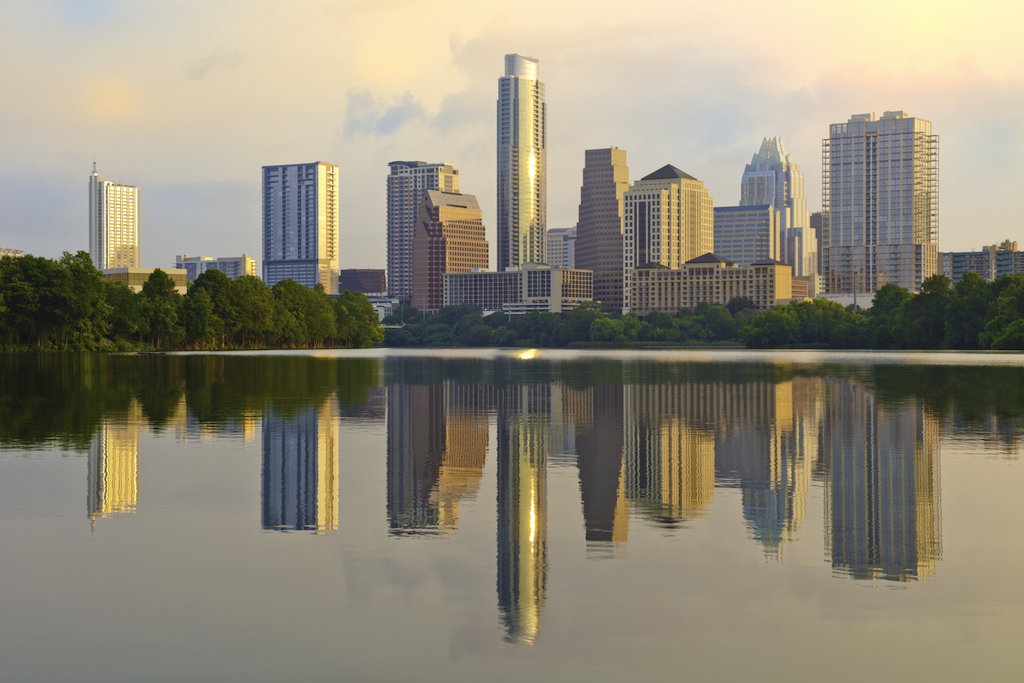 Thanks to Austin’s nice year-round weather, it’s almost always a good day to get out on Lady Bird Lake, whether you rent a canoe or stand-up paddle up, or take a boat cruise. But it’s also a great place to bike, thanks to the Ann and Roy Butler Hike-and-Bike Trail. The path, which makes a circuit around the lake, is more than 10 miles long and now includes a paved boardwalk. Definitely make the boardwalk a resting point, especially in the early morning, or around sunset: The path juts out into the water, giving you a great view of the city skyline with the sun reflecting on the water. Mike’s Bikes offers both bike rentals and guided tours.

Get batty at Congress Avenue Bridge 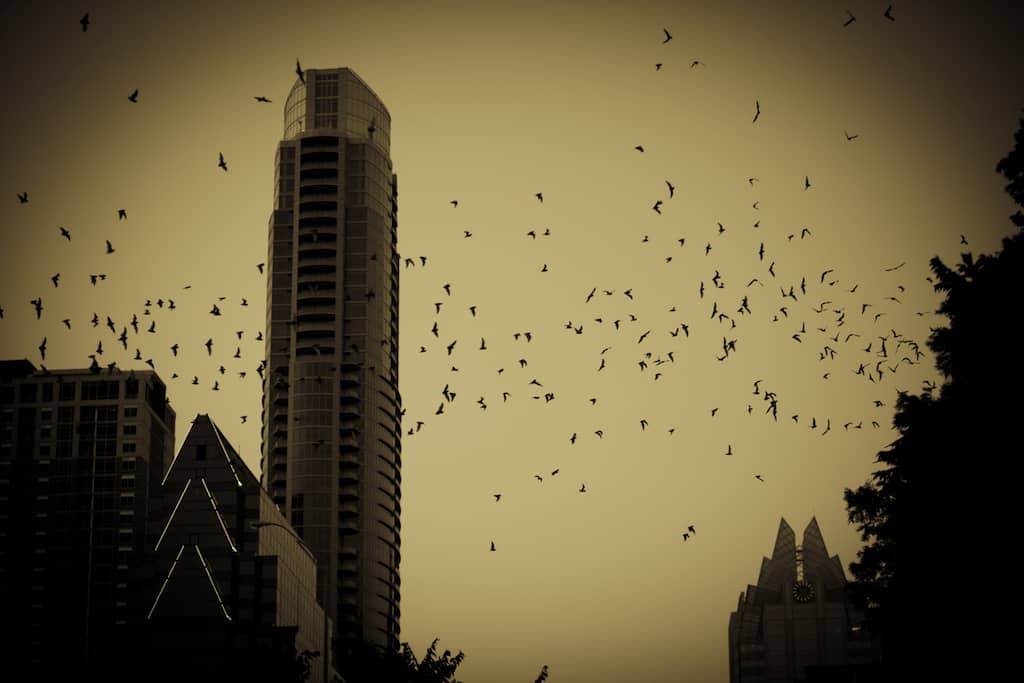 Some locals might tell you it’s gross or just silly, but you probably haven’t seen anything like the bats at Congress Avenue Bridge before. If you happen to be in town between March and October (June is peak), seek out a spot along the East Side of the bridge or on the sloping grassy area below, and wait for sunset. When they’re ready, about 1.5 million Mexican free-tailed bats will fly out from under the bridge in droves! For even better views, plan a bit ahead and get out onto the water in rented kayaks or canoes, or with a guided tour; several local businesses offer them, including Live Love Paddle (book ahead here) and Congress Avenue Kayaks. 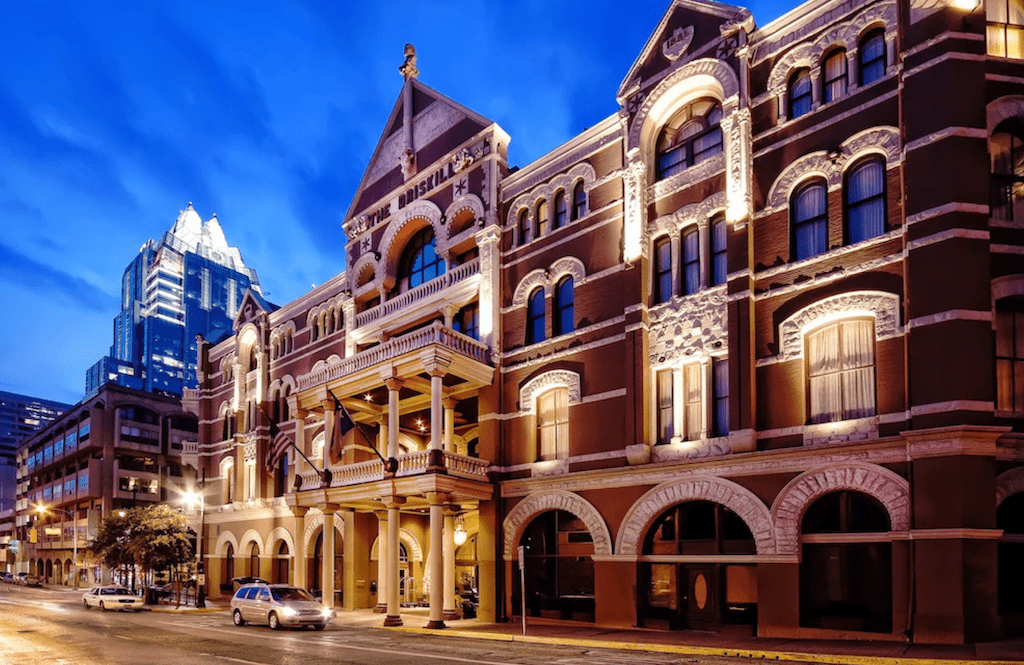 The Driskill Hotel at the corner of Sixth and Brazos streets, Austin

The raucous bar scene of West Sixth Street, known locally as “Dirty Sixth,” might elicit eye rolls from too-cool locals. But if you’re looking for some good, mindless fun a la Bourbon Street in New Orleans, this is the place. Think saloons, honky-tonks, late night places to grab grub and even doughy Portland import VooDoo Doughnuts; plus it’s closed to cars Thursday though Saturday nights, which makes it a great place to just walk around and hang out. We recommend getting to know this stretch through a proper bar hop, to take in some of the up-and-coming bands that help make Austin the “Live Music Capital of the World,” fill up on cheap drinks and chat up some new friends before moving on. If you’re looking for something a little more sophisticated and subdued on Sixth Street, slip into the Driskill Bar at the famous 1886 Driskill Hotel for a cocktail.

Or make it Rainey 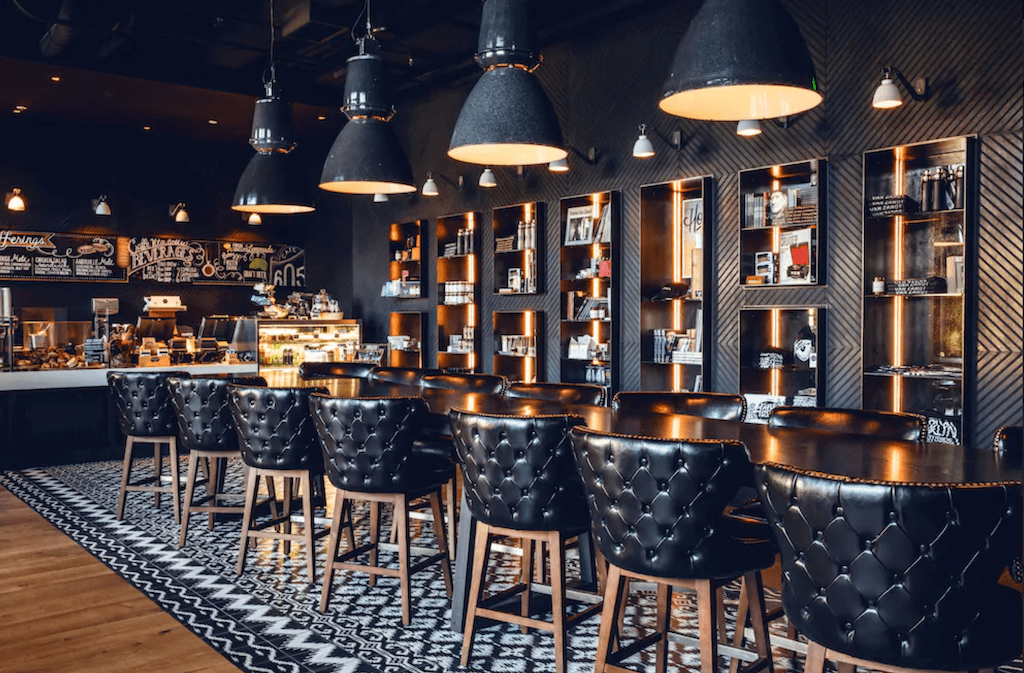 Don’t get us wrong, Sixth Street can be fun, but if the debauchery, college antics and bachelorette revelry get to be too much, that’s where Rainey Street Historic District comes in. So named for the historic bungalow homes lining the street, Rainey is justly famous for being the city’s other—and arguably better—entertainment district. Anchored by the upscale Kimpton Hotel Van Zandt and including elegant foodie hangouts like Emmer & Rye, bars still rule here. Check out Container Bar, a taproom crafted from shipping containers, or jazzy Half Step.