What’s so wrong about idling all morning in a Left Bank cafe or spending the afternoon immersed in antiquities at the Louvre? We say, nothing. While it’s true there are tourist attractions that are completely skippable (you won’t find celebs anywhere near the Hollywood Walk of Fame and you’d be foolish to waste a visit to Scotland searching for the Loch Ness Monster), the fact of the matter is that many tourist attractions are ridiculously popular for good reason. When in Paris, definitely do these 10 super touristy things—just don’t wear a beret while doing them, okay?

RELATED: Tips for visiting Paris on a budget

Have an Eiffel Tower moment 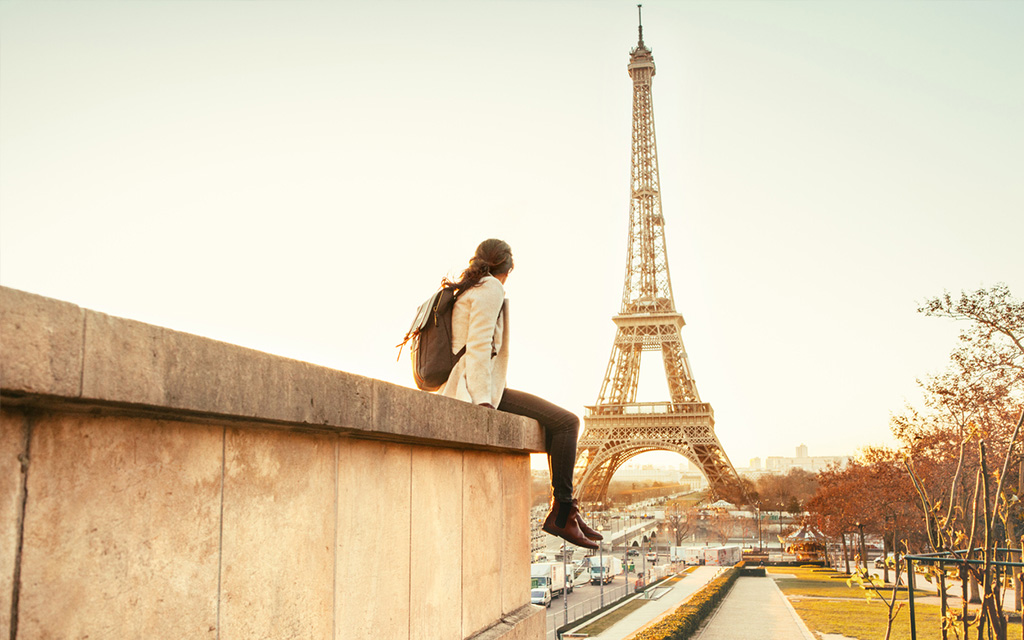 It’s one of—if not the—most famous landmark in the world. And here’s the thing—it’s a ubiquitous part of the Paris skyline, which means you’ll engage with it no matter what. But do yourself a favor and get up close. Stand in front of it and admire its wrought-iron lattice handiwork, climb all 704 exhausting stairs to the top of it, hit up the Champagne bar or one of two restaurants tucked within it, or just take a selfie with the Tower in the background. But definitely don’t skip it. Advance tickets that let you skip the line are available here. 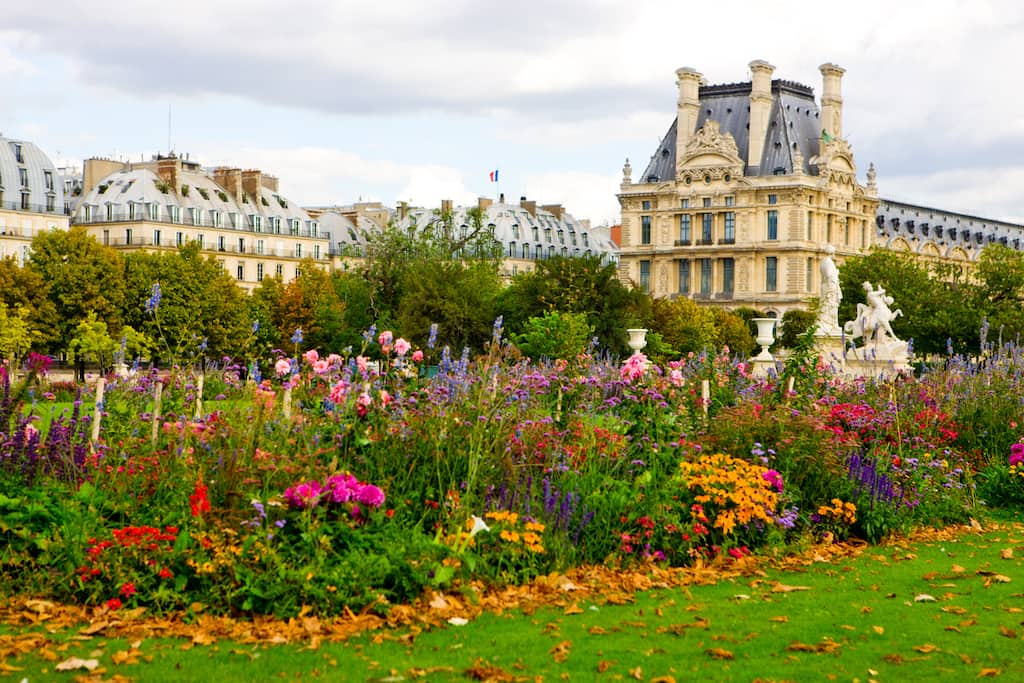 The Mona Lisa is overrated, but the Louvre is not. The largest and most visited museum in the world is 100% worth your time. Its collection boasts more than 38,000 works of art dating from pre-history to the 21st century (including the Venus de Milo among other masterworks). And while the Mona Lisa is small and often blocked by selfie-stick wielding tourists, it would be pretty foolish to visit the Louvre and not take at least a passing glance at the most famous painting on earth. Book your tickets in advance here to avoid a wait.

Get that song stuck in your head at the Moulin Rouge

You know the cancan song. You know the dance, or at least the high kicks. And you may have even seen the movie. Now is your chance to find your way to that famous red-neon windmill and experience the Moulin Rouge for yourself. The famed cabaret has been entertaining Paris denizens since 1889, and is now best known as the birthplace of the raucous cancan—frilly skirts, high kicks, quick flash of garter belts and all. Tip: The show often sells out so it’s recommended you buy your tickets well in advance; also, seats are first come, first served, so arrive early for a great vantage point! 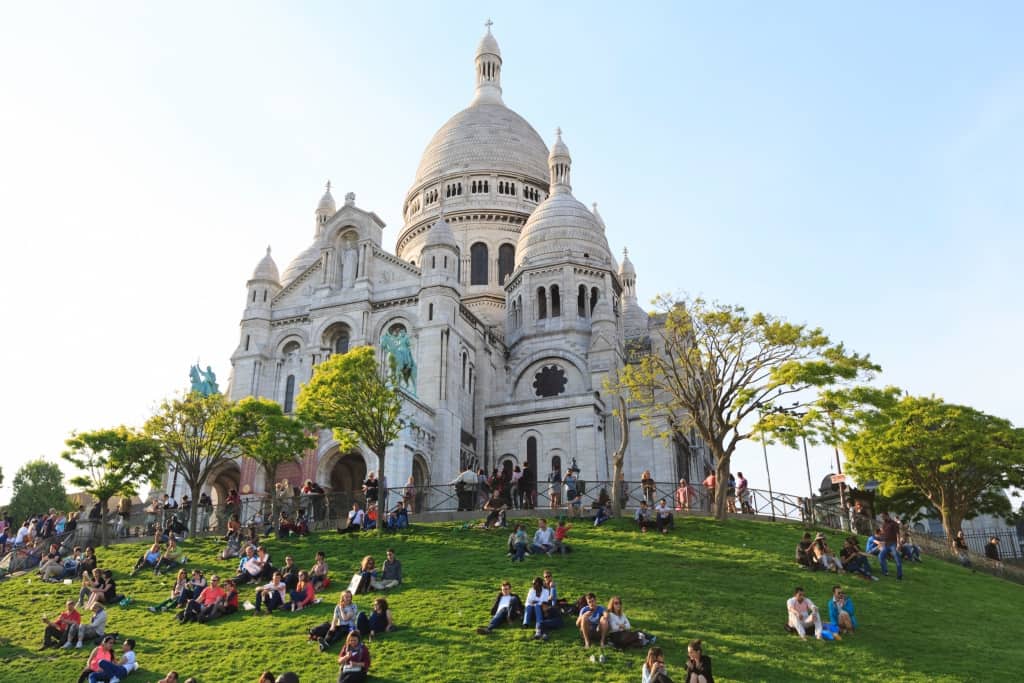 Birds get all the best views of Paris. For the rest of us, there’s a Metro ride to the 18th arrondissement followed by a charming climb to the top of Montmarte—the highest hill in the city. The rewards waiting at the top are numerous and include striking city vistas, elegant basilica Sacre-Coeur (beautiful in its own right, but also a churchy substitute for Notre Dame which was burned badly in 2019) and a stroll through Montmarte Village which is lined with cafes, street artists and, admittedly, a few tacky souvenir shops.

Wander along the Seine at night 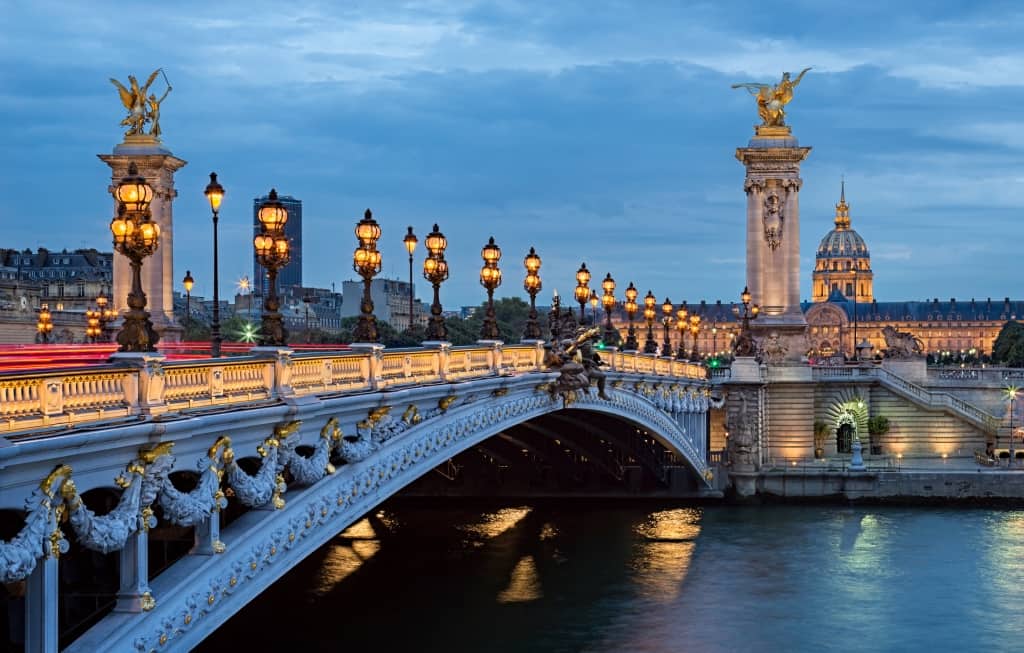 The Seine River neatly divides Paris into its Right and Left Banks while also functioning as an important commercial waterway. Besides that, the river is lined with pedestrian walkways and dotted with numerous bridges—perfect for a leisurely stroll. Meanwhile, Paris is the City of Light, a glittery metropolis that dazzles like no other after dusk. Every first time visitor to Paris, whether visiting the city solo or with a romantic partner, should walk this famous river while the city twinkles around them. 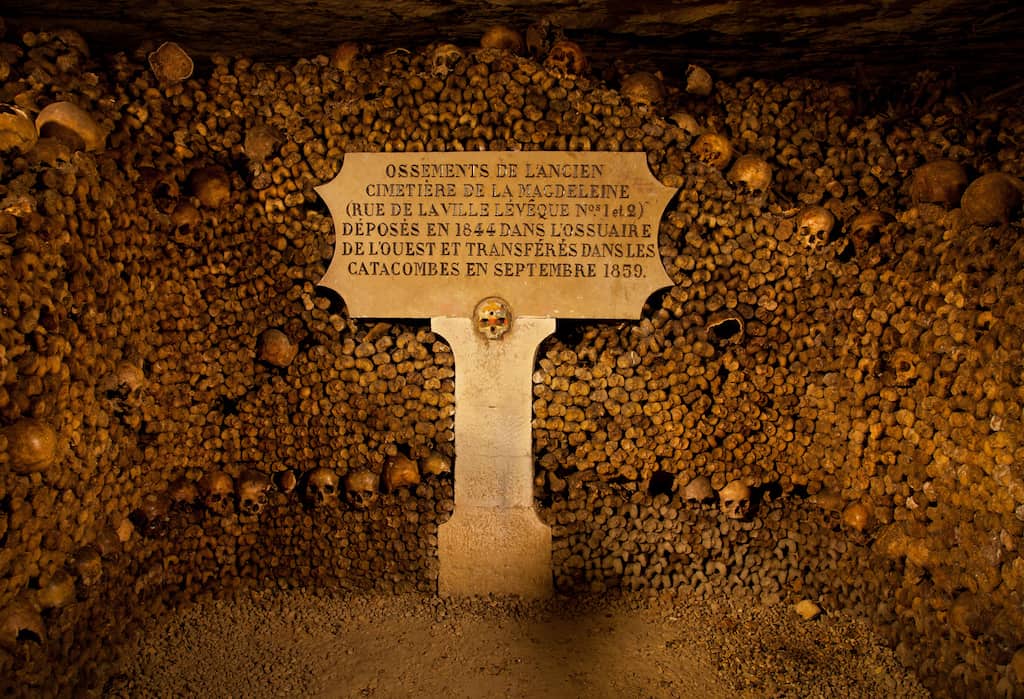 Walking through underground tunnels lined with human remains might sound macabre, but it’s an experience you won’t soon forget. First, put on some sensible shoes and a sweater (the paths can be slippery and temperatures hover in the mid 50s), then head to the new entrance at place Denfert-Rochereau. Once you descend the spiral staircase, you’ll walk skull- and bone-lined paths that once served as quarry tunnels. The catacombs came to be when, starting in 1785, bones were moved here to combat hygiene issues in the city’s overcrowded cemeteries. Eventually more than 6 million bodies were exhumed. While visitors can only explore about a mile of the paths, the entire network runs for about 200 miles. Tip: Lines can be long, especially in summer; book your tickets online here ahead of time.

Stroll along the Champs-Elysées 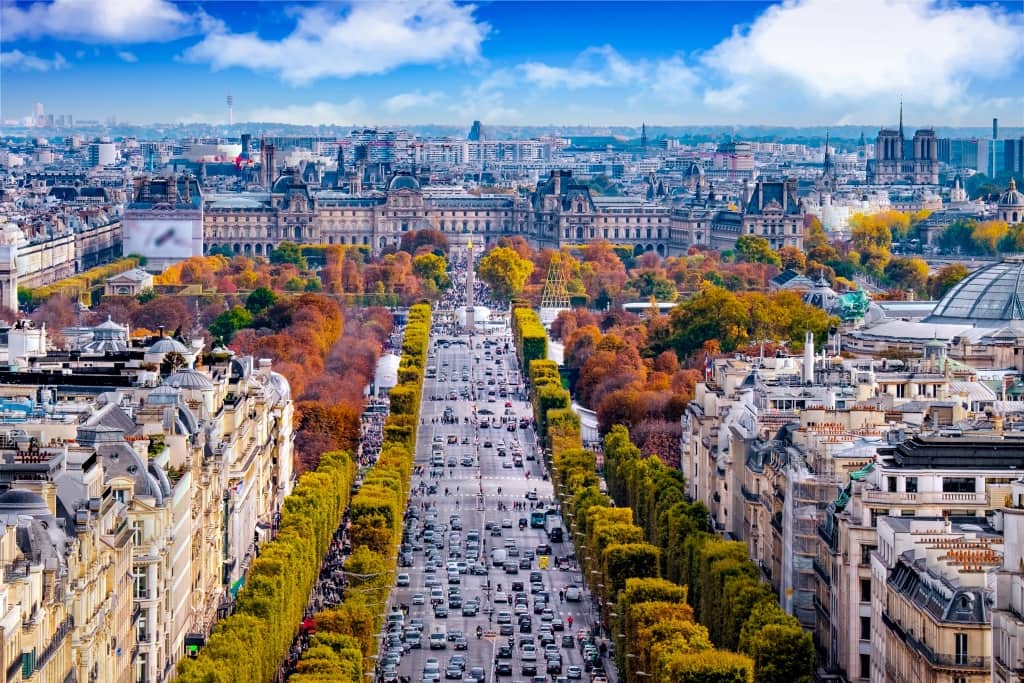 The most famous Avenue in all of France is rife with things to do. It’s home to stores like Louis Vuitton, Hermès, Chanel and Gucci and thus the place to go on a Parisian shopping spree. But wait, there’s more. It also boasts numerous high-restaurants, outdoor cafes, cinemas and theaters and is bookended by the majestic Arc de Triomphe on one end and the Place de La Concorde (a major public square) on the other. It’s quite frankly hard to miss and there’s no reason why you should.

Only 40 minutes from the city center, the Palace of Versailles offers opulence the likes of which you’ve probably never seen before. The official royal residence during the late 17th and most of the 18th century (until the French Revolution brought an end to the monarchy), Versailles remains quite the spectacle and a feat of architecture and engineering. Highlights include the Hall of Mirrors, the Royal Chapel, Petit and Grand Trianons, the Royal Opera, and of course the beloved Gardens of Versailles. You could even book a Versailles guided bike tour, which includes the chateau, gardens, Trianons, apartments, Royal Forest, skip-the-line palace entrance—and a picnic lunch along the canal. 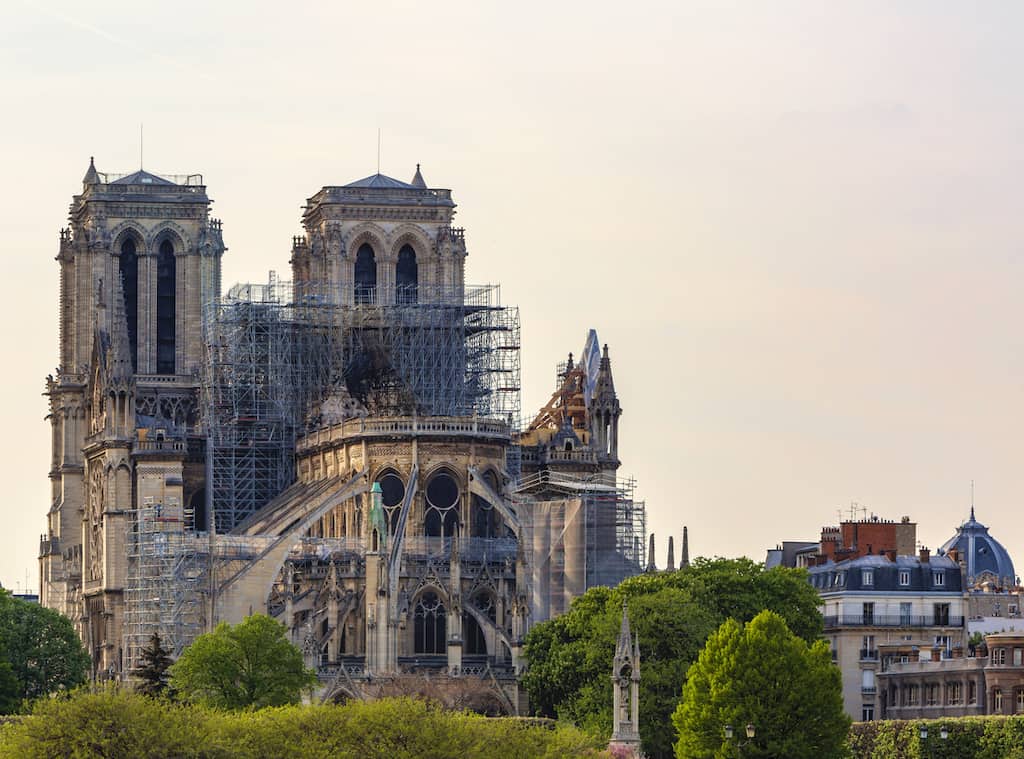 The remains of Notre Dame Cathedral after fire destroyed the roof on April 15, 2019

On April 15, 2019, a French cultural and historical treasure went up in flames. Fortunately, a great portion of Notre Dame Cathedral was saved but the $1 billion restoration process has just begun and for the foreseeable future, it remains closed to visitors. Some experts estimate it could take 10-15 years to fully reconstruct the 800-year-old edifice, but until then, you can still view the exterior from the Seine River and nearby bridges.

It would be a grave mistake (literally!) to skip over the lesser-visited 20th arrondissement and that’s because this sleepy area does boast one big attraction: Père Lachaise, a pretty cemetery where more than 800,000 Parisians have been buried—including some super famous folk. The cemetery is a veritable who’s who of the dead and includes Jim Morrison, Oscar Wilde, Edith Piaf, Chopin, Seurat, Moliere, Marcel Proust, Isadora Duncan and Gertrude Stein, among many others.

Strike a pose at an sidewalk cafe 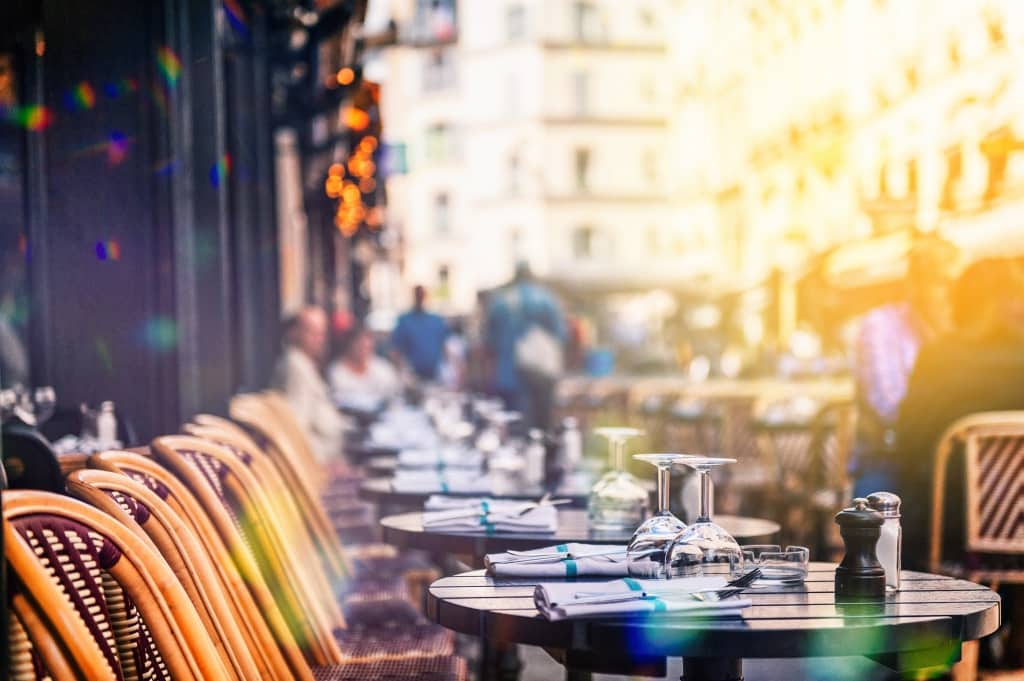 Americans love to romanticize Left Bank cafes, thanks to artists and writers like Hemingway, the Fitzgeralds, Dali, Picasso and other members of the Lost Generation who wiled away their days discussing and creating there in the Roaring Twenties. Famous spots include Cafe de Flore and Brasserie Lipp (both of which are still in operation), but the one tourists love the most is Cafe Les Deux Magots. If it were in America, it would be selling T-shirts and keychains and posters of Papa would hang everywhere. But this being Paris, it’s still an elegant place to hang. Other charming options include Belleville’s Aux Folies and Montmartre’s Le Sancerre, where you can sip coffee or wine while mingling with (or just watching) the bohemian, biker and touristy crowds. For a deliciously romantic piece of classic Parisian history, head to Saint-Germain-des-Prés’ Cafe de Flore where Simone de Beauvoir and Jean-Paul Sarte often rendezvoued.

Be impressed by Impressionists

While the Louvre steals the spotlight in terms of Paris museums, it would be tragic to miss the Musee d’Orsay if you have even a passing interest in art. The Art Nouveau-style former train station the museum calls home is gorgeous enough on its own, but inside you’ll find the world’s largest collection of Impressionist and Post-Impressionist art—including instantly recognizable pieces by Manet, Monet, Renoir and Van Gogh, among others. Skip-the-line guided tours are available, and some include lunch at the museum’s revered on-site restaurant, which is run by renowned chef Alain Ducasse.